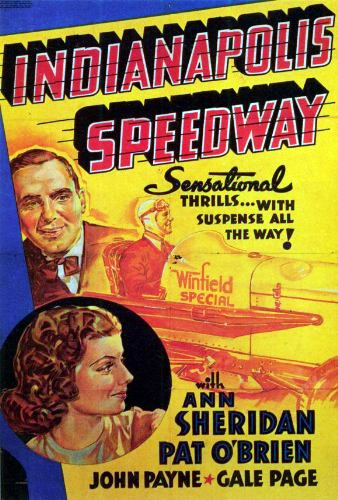 It's really a shame. The actors in the movie were better than the material and the complete rip-off of the footage from the original makes this a cynical attempt by Warner Brothers to expend little money or effort to squeeze a few more bucks out of an ancient story. While not quite the carbon copy that the two Dawn Patrols are to each other, Indianapolis Speedway and The Crowd Roars did use a lot of the same footage and dialog for its principal players. In the case of Frank McHugh since his character is killed in both Jack Warner really pleased the bean counters in his place.

The film was trying to establish John Payne as an action star. Payne who was newly acquired from Paramount really doesn't get his career stride until his next move over to 20th Century Fox. Here he and Pat O'Brien are brothers just as James Cagney and Eric Linden were in The Crowd Roars.

For reasons never fully explained O'Brien wants to both keep Payne away from a career in racing and Ann Sheridan. As Payne is an adult O'Brien is way out of line. But after their friend McHugh is killed it's O'Brien whose career really hits the skids.

Automobile racing buffs will like Indianapolis Speedway and the vintage cars, but the film will never make the top ten list for O'Brien, Sheridan, or Payne.